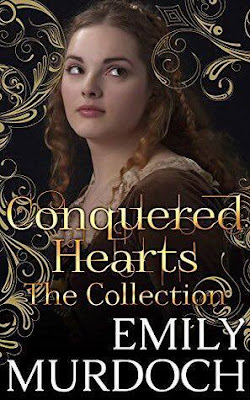 England, 1069. The nation is still recovering from the Norman invasion three years earlier - and adjusting to life under its sometimes brutal new rulers. A young girl trembles in the shadows of what was once her home.

Avis is homeless and penniless, and with no family left alive she is forced to become a ward of Richard, the Norman lord who has taken her home. But when King William decrees that Norman lords must marry Anglo-Saxon women Avis must make a terrible choice: either marry the repulsive Richard or take a else chance on another Norman, Melville, a man she has never met.

Soon she realises that survival in a time of turmoil and war depends of putting aside the prejudices of the past. And if she can do so, kingdoms and hearts can still be among her 'Conquests'…

Having built a rich empire and keen to win the favour of the royal court, Hilda and Ælfgard have little time for their daughter, Catheryn. But one man, Selwyn, is intrigued by the intelligent and high-spirited girl. Selwyn sends Catheryn a love letter as a joke, disguising it as though it is from one of her father's thanes. Catheryn is fascinated by the letter, and cannot imagine who would be capable of sending a poem of such imagination and beauty.

When Selwyn offers to help Catheryn identify the mysterious suitor, she accepts, and they start to realise that they have more in common than they thought. Soon, Catheryn finds herself falling in love with Selwyn instead… But the strict hierarchy of Anglo-Saxon England stands in their way. Selwyn, a steward, could never be considered Catheryn's equal, let alone an eligible suitor.

Will they manage to stay together despite the odds? Or will duty tear Selwyn and Catheryn apart?

Normandy. 1067. Lady Catheryn, an Anglo-Saxon noblewoman, is taken against her will to Normandy after the invasion. She arrives, a prisoner, at the castle of Lord Geffrei, a ruthless invader who hopes to gain a ransom for her. When Queen Matilda, William the Conqueror’s wife, sees her plight, she takes pity on her. Catheryn is sent to the castle of the noble FitzOsberns – but will her new captivity be any better than the cruelty she faced at Geffrei’s hands?

She finds her hostess cold and embittered, but when her husband William FitzOsbern returns from the Conquest, Catheryn’s heart is torn by unwanted emotions. She becomes entangled in the quarrels and heartbreaks of her jailers even as she tries to remember her place among them. Is she falling in love with the man who helped to destroy her homeland?

Emily Murdoch is a medieval historian and novelist. She lives in York.

Free to Kindle Unlimited Subscribers
Posted by ella jade at 12:00 AM